DragonForce guitarist Herman Li and drummer Dave Mackintosh will return to China for a guitar and drum clinic tour with special dates added in Indonesia and India. At each clinic, Herman and Dave will be performing a number of DragonForce tracks, answering questions from fans and demonstrating techniques followed by an autograph/photo session.
There has been overwhelming demand for DragonForce to return to China since their sold out Beijing show in 2009. The clinic tour is sponsored by Ibanez guitars and Tama drums, with Herman kicking it off in Kunming in southern China, making its way north and back finishing in Guangzhou. Dave’s drum clinics will start two days earlier in Indonesia before joining Herman in Chengdu China, pairing up for the rest of the Chinese tour. 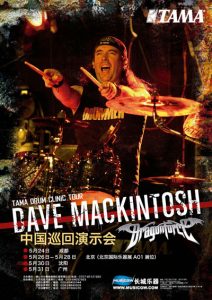 Apart from individual dates, Herman and Dave will also be performing at the PALM Expo 2011, China’s largest and most established event for music and technology, the 2nd largest event of its kind in the world. After China, Herman will complete the tour on his own with his first-ever appearances in India.
DragonForce will be one of the first international bands to do a full scale clinic tour in China.
Herman Li says, “We are really excited to be touring in China. We had an amazing time two years ago and really appreciate the loyal support from so many fans and friends there. It’s gonna be a blast, we can’t wait to get out there!”