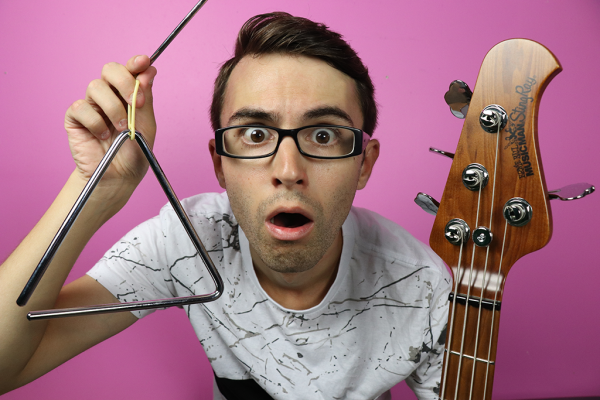 DragonForce announced on Wednesday that musician and YouTube personality Stevie T (Steve Terreberry) will join the band for the US leg of its upcoming world tour. DragonForce guitarist Herman Li jokingly invited Stevie T to join the band this summer, asking him to play the triangle. Stevie T responded with a video on his YouTube channel, accepting Li’s offer and playing an extended triangle solo to DragonForce’s hit “Through the Fire and Flames.”  Stevie T’s ground-breaking triangle solo can be viewed below:

Li said “I was deeply moved when I saw Stevie T’s technical precision and finesse on the triangle and immediately invited him to join the tour. This is a once in a lifetime opportunity to see the greatest triangle player ever to grace this earth.”  Stevie T will also step in to play bass for the band, after the departure of bassist Frédéric Leclercq, which was also announced on the band’s website on Wednesday. Leclercq’s last show with DragonForce will be this weekend at Elb-Riot in Hamburg, Germany. Li said, “We want to thank Fred for all the musical contributions and good times over the years. As sad as we are to lose him, we are excited that he is going to continue playing the music he loves. He will always be a friend and a member of the DragonForce family.”

DragonForce’s new album, Extreme Power Metal, will be released worldwide on September 27th, 2019. Produced in Los Angeles, California by Damien Rainaud at Mix Unlimited, Extreme Power Metal was also recorded, in part, on guitarist Herman Li’s livestream channel on Twitch (www.twitch.tv/hermanli) with participation from the fans. For a first preview of the album, a video for the new single, “Highway to Oblivion”, can be viewed below: