DRAGONFORCE, the stellar musicians whose latest ‘Ultra Beatdown’ album charted strongly all over the world, have announced the release of their first live album.

Featuring 13 tracks, including such pivotal numbers as ‘Fury Of The Storm’, ‘Operation Ground And Pound’, ‘My Spirit Will Go On’, ‘Valley Of The Damned’, ‘Heroes Of Our Time’ & ‘Through The Fire And Flames’, this exercise in soaring vocals & advanced guitar pyrotechnics was recorded across 19 UK shows, with the very best takes lovingly compiled and mixed by Groom, Totman & Li.

“For years, fans have been asking us to record a live album, but honestly, we never really had the time due to our worldwide touring commitments and studio album recording. However, due to the overwhelmingly positive feedback from fans on the ‘Ultra Beatdown World Tour’, we decided to finally put some real thought into it…

“The idea was to record every single show from the last leg of the tour, so we could pick the best take of each song without needing to do any overdubs in the studio; keeping the whole thing ‘LIVE’ like all the classic live metal albums.

“These recordings really capture the raw sonic energy of a Dragonforce show in fine detail. It is soreal that you can hear the noise of the crowd and experience the show as it was that night – you can even hear the guitar pedals being stepped on!”

FORMED IN 1999, Dragonforce – a multi-national amalgam of players at the very top of their game – have spent the past decade proving that virtuoso musicianship and strong songwriting values can appeal to rock fans right across the board; it’s a journey that has seen the band playing sold-out headline shows around the world, including in markets as far afield as China, Hawaii, New Zealand, Russia & Columbia, forging a telling relationship with the ‘Guitar Hero’ franchise, and tucking four strong studio albums under their collective belt, with sales currently topping the two million mark worldwide.

And now, whilst seeking a replacement for recently departed singer ZP Theart, the band have delivered a set of recordings that successfully highlight the non-stop energy and entertainment-or-bust ethos of the Dragonforce musicians in full live flow. 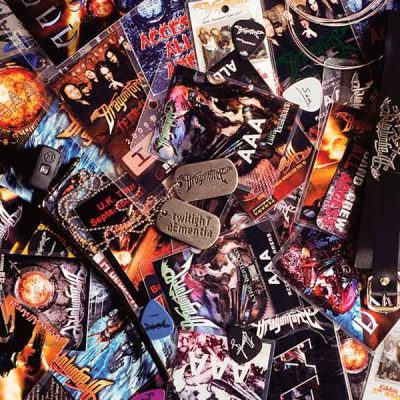